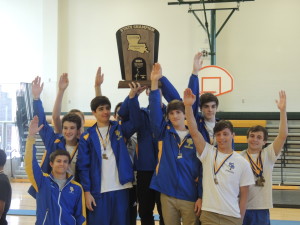 Saint Paul’s gymnastics team started its first year at Saint Paul’s in 2011-2012 and brought home a state championship that year. The second year of competition resulted in a second state championship. Students are coached by Olympian Ivan Paulouski at Northshore Gymnastics. The practice season begins in October and runs through the end of April. Gymnasts train for a floor, still ring, parallel bar, pommel horse, and high bar routine. In the floor routine, gymnasts perform no more than 70 seconds without music to a choreographed routine that includes tumbling and handstands to showcase their strength, balance, and flexibility. On the still rings gymnasts perform a routine keeping the suspended rings as still as possible while swinging and holding positions before dismounting. On the parallel bars the gymnasts swing, hang, hold poses and dismount on two wooden bars held above the floor. On the horizontal bar gymnasts complete a combination of hand turns around a cylindrical metal bar supported by polls before dismounting. On the pommel horse gymnasts support their body above a metal frame covered with padding and a leather cover with plastic handles. They swing their legs around, scissor their legs and straddle the horse without allowing their legs to touch the horse.